by Alberto Savoia
Jeff Hawkins was a Palm co-founder and one of the inventors of the Palm Pilot.  Legend has it that, before committing to develop the Pilot, Jeff made and carried a mock-up (a block of wood) in his pocket for several weeks.  According to a story on Time magazine:
"Hawkins, 40, Palm's chief technologist and Pilot's creator, designed one of the first handheld computers, the GRiDPad, a decade ago. It was an engineering marvel but a market failure because, he says, it was still too big. Determined not to make the same mistake twice, he had a ready answer when his colleagues asked him how small their new device should be: "Let's try the shirt pocket."
Retreating to his garage, he cut a block of wood to fit his shirt pocket. Then he carried it around for months, pretending it was a computer. Was he free for lunch on Wednesday? Hawkins would haul out the block and tap on it as if he were checking his schedule. If he needed a phone number, he would pretend to look it up on the wood. Occasionally he would try out different design faces with various button configurations, using paper printouts glued to the block." 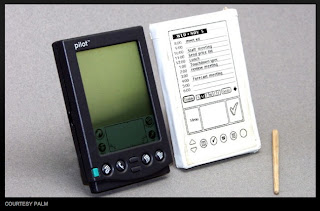 This story embodies the core motivations and principles of pretotyping:

While mock-ups and non-functional prototypes are quite common in innovation, the act of pretending that the mock-ups are functional and using them as such (especially for an extended period of time) is much more rare.  Pretending is key to pretotyping.  As a matter of fact, before I hit upon the term pretotype, I came up with pretendotype.  I eventually settled on pretotype because pretendotype was a mouthful.  It's useful to remember, however, that the 'pre' in pretotype stands not only for earlier, prior to or before (as in "before you build it"), but also as reminder of the importance of pretending.
The Pilot story is also a great way to illustrate one of the key differences between pretotyping and prototyping – and why we think it makes sense to introduce yet another word in the innovation vocabulary.  The picture above is a classic pretotype, the picture below (a Pilot prototype board, from the Computer History Museum in Mountain View) is a classic prototype. 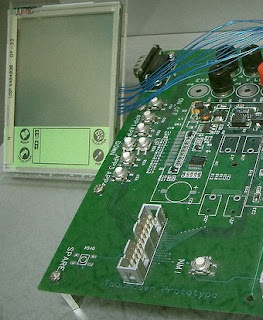 
The line between pretotypes and prototypes is fuzzy; and some ideas lend themselves to pretotyping better than others.  It would be difficult and not too useful, for example, to pretotype a laser before building one.  But I believe that, in all cases, it's worthwhile to spend at least a few minutes thinking whether or not there is an opportunity for pretotyping and what could be learned by doing so.


I hope you enjoyed this first post on our pretotyping blog and found it useful.  Feel free to comment and add your favorite examples of pretotyping.


Alberto
Posted by Alberto Savoia at 10:49 AM